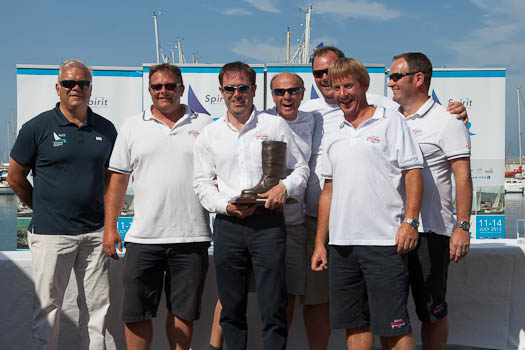 Issue Sunday 14th July @ 5.15pm) Home grown success is being toasted in Dun Laoghaire tonight following the conclusion of Ireland’s biggest sailing event, the Volvo Dun Laoghaire regatta on Dublin Bay. In spite of an influx of over 120 visiting boats, key trophies are staying in the waterfront clubs after this afternoon’s prizegiving at the Royal Irish Yacht Club brought the curtain down on the 2013 event. The Royal St. George YC had success in seven classes, Royal Irish sailors won six, including IRC classes 1 and 3, and the National YC won four one design divisions. Howth picked up two wins in IRC non-spinnaker divisions.

Trophies were awarded in each of the 25 competing classes plus several premier awards.

The top overall prize, for the Volvo Trophy, went to the Class II IRC winner Checkmate XV, a 1985 vintage half?tonner that has been extensively refitted. The Nigel Biggs skippered entry from the Royal St. George Yacht Club, sailed by a group of friends, won all five race in its 26-boat fleet. In a successful season so far for this Rob Humphrey’s design, Biggs now adds the Volvo crown to the national title taken last month in County Kerry.

The biennial regatta is being hailed an enormous success both afloat and ashore. A combined fleet of 393 boats raced over eight courses in a range of light to medium conditions since racing began last Thursday.

In the J109 class, John Maybury’s Joker II from the Royal Irish Yacht Club won this morning’s final race to overhaul Pat Kelly’s Storm and win Volvo honours and the Irish title too by a single point. Another Royal Irish boat, Bon Exemple, the Xp33 skippered by Colin Byrne, was the winner of IRC one and also received the top IRC boat prize in the regatta. Second in IRC one was Scotland’s Now or never 3 with Byrne’s club mate Paul O’Higgin’s Rockabill V third. Jean Mitton’s Levana from the Royal St. George has been awarded best one design performance of the competition following her win in the 17?boat Beneteau 31.7 fleet, a results that bodes well for next month’s national championships on the same race track.

With five wins in nine races Ian Mathews and Chris Russell were clear winners in the Flying fifteen one designs. Michael O’Connor of the Royal St. George won the SB20s and club mates Derek Jago and John O’Rahilly won the Squibs. After ten races sailed in the Fireball dinghy class, Bryan Byrne and Steven Campion were two points clear of Conor and James Clancy to win the Volvo prize.

The next Dun Laoghaire regatta will be held mid-July 2015.

A breakdown of overall results is below and full results on www.dlregatta.org