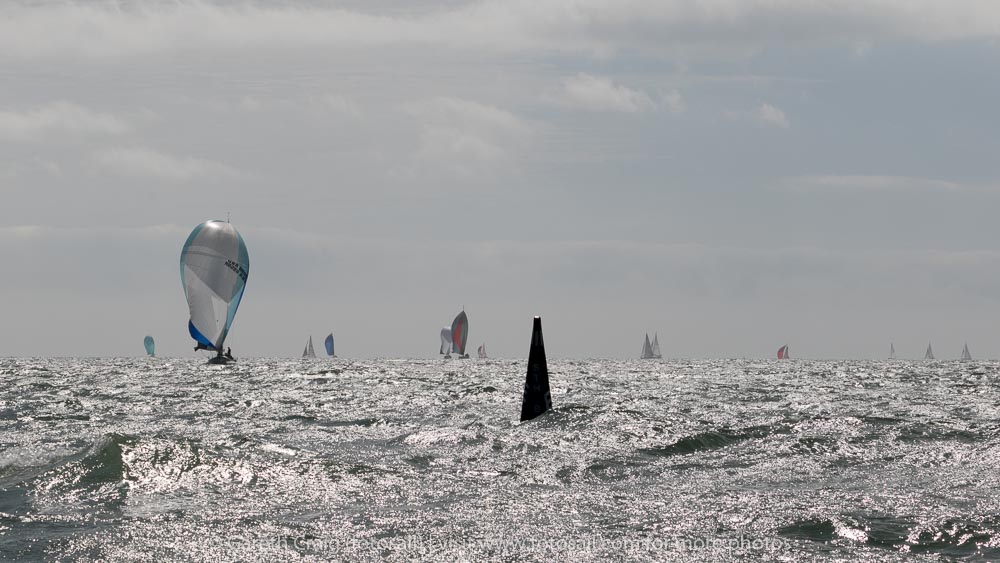 As Volvo Dun Laoghaire Regatta 2015 reaches its halfway stage, overall leaderboards are shaping up across 29 racing classes. With strong winds, the sixth edition of Ireland’s biggest sailing event has produced some impressive performances on the water and boat handling skills are at a premium. With a strong wind warning there was always going to be gear damage on day two of the massive 415-boat regatta. Battered sailors returned to harbour tonight with plenty of stories from the race course of retirals, torn sails, crews overboard, capsizes and dismastings. A lifeboat call–out only added to the drama of day two.

It marked a busy day for both for competitors and the race committee who were forced to postpone racing for the dinghies and one designs until lunch time as southerly winds touched 30-knots. With all classes aiming for either two or three races today, results in the 415-boat fleet were still being computed in some classes at 7pm.

Racing started with the bumper 25–boat IRC offshore class and a start close to the Dun Laoghaire shoreline. Adrian Lee’s canting keel Cookson 50 Lee Overlay took an immediate advantage in the heavy airs to lead the fleet south and now leads the division from George Sisk’s Farr 42 WOW from the Royal Irish Yacht Club. Third is Kinsale visitor Freya, an X–442, skippered by Conor Doyle. The offshore race was not without incident and in the closing stages in the afternoon the Dun Laoghaire lifeboat was called to render assistance to a man overboard from the Arklow J122 Aquelina with winds reaching 25 knots in choppy seas.

Three straight wins for Royal Cork Yacht Club’s Ker 37 Jump Juice puts skipper Conor Phelan in the running for the top overall performance in the regatta so far. The former Commodore’s Cupper is now five points clear of the Clyde’s Corby 37 Auora (R Stuart and B Ram) in the seven boat fleet. Struggling to perform however in this big boat class is the smallest boat in class, the new C&C 30 Checkmate XVI under skipper Nigel Biggs from the Royal Irish.

In class one, two Royal Irish yachts, Bon Exemple, an XP33 and Paul O’Higgins’ Corby 33 Rockabill V are separated by a single point at the top of the 16–boat fleet. Third is another Dublin Bay entry, the A35 Gringo skippered by Tony Fox of the National Yacht Club. South Caernarvonshire Yacht Club J97 Injenious is the leader of class two from Howth Half–Tonner Checkmate XV. Third is Craig Latimer’s J/92 Wildebeest V from the Clyde Cruising Club. The Howth X 302 Dux (Anthony Gore-Grimes) is counting two wins and a second to lead club–mate Paddy Kyne’s sister–ship by a single point in the 11–boat class three. Third is another Howth boat, the Corby 25 Fusion (Richard Colwell/Ronan Cobbe). After three races sailed, Royal Irish yachts have taken the lead in cruiser class four. Paul Colton’s Quarter Tonner Cri Cri has the same five points as the Royal Ulster Yacht Club and Ballyholme entry Starflash (Alan Morrison and John Simms) but leads by virtue of two race wins today.

Pat Kelly’s first race advantage in the J109 National Championships, being sailed as part of the regatta, turned out to be short–lived when Thursday’s race was scrubbed due to an error in the starting sequence. The aim is to re-run that race tomorrow. Kelly, however, did not let the setback deter his national title ambitions and took two further wins today. It puts the Howth boat at the top of the leaderboard ahead of pre–regatta favourites, John Maybury’s Joker II, who counts two seconds.

According to forecasters, it looks like there will be more blustery south-westerlies for racing tomorrow, moderating slightly for the final races on Sunday morning.