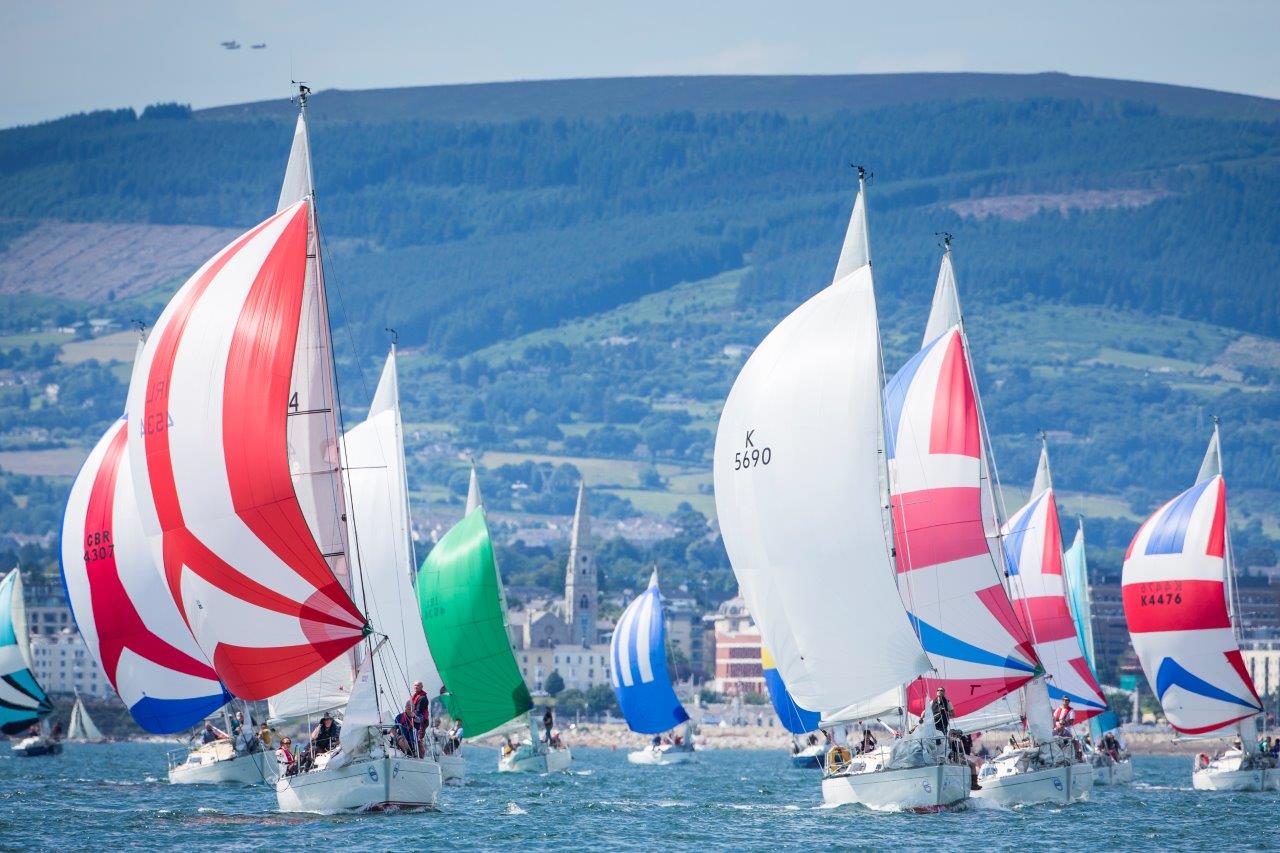 With three months to go to the first gun off Dun Laoghaire’s famous harbour, 410 boats are already entered — and more than half the entries are visiting craft.

It is an early-season marine tourism boost for the east coast town, and one that means the next edition of Ireland’s biggest sailing regatta can expect a fleet of 500 yachts and possibly more for this biennial four-day battle of the Irish Sea. More than 70 different sailing clubs are represented, including the Channel Islands, Isle of Man, UK, Scotland, Wales, Northern Ireland, from which there are currently 111 entries, and across Ireland. In a nod to the event’s growing international stature, an early entry has been received from the Royal Hong Kong Yacht Club with ex-pat Jamie McWilliam sailing the production IRC race boat Signal 8, an impressive Ker 40 design.

Growing over the last 14 years, the regatta is now proudly one of Northern Europe’s greatest shows on water, eclipsed only by the UK’s Cowes Regatta, one of the longest-running regular regattas in the world. “Since it first set sail in 2005, Dun Laoghaire Regatta has grown biennially and showcases the very best of Irish sailing action on the water. With a festival this size, the regatta also adds a lot of shoreside summer colour to Dun Laoghaire town”, Event Chairman Don O’Dowd said. With over 300 sailing races across 30 classes, and 2,500 competitors ranging from Olympic and world-class professionals to weekend sailors, there is a growing acknowledgement of the role of sailing as an economic driver in the harbour town.

“The Regatta brings a significant amount to the local economy. Using the Irish tourism multiplier, the average expenditure per competitor will be €100 per day which for 2,500 competitors will be €250,000 per day and €100,000,000 over four days. In an effort to protect our waters we are running the event as a Clean Regatta through the international Sailors for the Sea programme, supported by the MaREI Centre for Marine and Renewable Energy, which will see us implementing a number of Clean Regattas Best Practices to reduce our environmental impact.” O’Dowd added.

But the main interest is on the racing itself. A sideshow of the regatta is the national pride between Ireland and Britain and how many winners can rack up across the four days.

The Volvo Trophy is on the line for the overall winner of IRC and 2017’s winner, Joker II, a local J109 design, is back to defend it. Joker II, under skipper John Maybury, was also the class winner of the highly competitive Class One, and two years later this class has only got stronger with some new local marques such as Andrew Algeo’s J99 Juggerknot II, as well as Scottish and Belfast boats contesting this division. The Scottish boats come to Dun Laoghaire under the recently developed RC35 Class banner that will make the 35-foot regatta one of the most keenly contested battles of the season.

As well as Class One, key classes in the line-up include the other IRC rating classes with a visiting fleet of vintage Half Tonners from Howth Yacht Club contesting Class Two. In addition, ‘one design’ classes will include the Beneteau 31.7s, Beneteau 211, Sigma 33, Ruffian 23s, Dragons and the RS Elites, who stage their British Championships as part of the VDLR, currently with 34 entries. The dinghy classes will include the GP14, Wayfarer, Squib, Mermaid, Flying Fifteen, and single-handed Lasers and Moths.

But it’s not all high-tech racing at Dun Laoghaire. Traditional sailing is still very much a part of the regatta programme. Following 2017’s harbour bicentenary celebrations as part of the regatta, Myths & Seabird Half Raters from the 100-year-old Trearddur Bay in Wales are crossing the Irish Sea again for the July festival and will join Dublin Bay’s own historic classes for a classic boat regatta as part of the overall regatta.

O’Dowd says: “The VDLR owes its prominence in European sailing events to a number of factors. One of the core attributes to attracting so many entrants is that it is one of the least expensive sailing events in Europe, thanks to generous sponsorship and support, so providing great value for money for all in the lovely waters of Dublin Bay. We also have more than 300 volunteers who give their time and energy to ensure the regatta runs smoothly, as well as the active co-operation of Dublin Bay Sailing Club, local area businesses and the Dun Laoghaire-Rathdown County Council. And of course the support from the thousands of visitors who come to watch the spectacle and take part in all the family-oriented activities in and around Dun Laoghaire.”

The VDLR is kindly supported by